The reason, or perhaps the excuse, for all this jaunting round Eastern Europe and Greece was WEGA’s excursion to Naxos. I was the secretary of WEGA (the West of England group of the Geologists’ Association) for several years and helped persuade Doug Robinson, a distinguished academic in Bristol University’s Earth Sciences Department, and now Chairman of WEGA, that he wanted to lead this excursion. Actually this was rather an easy task as he takes 4th year students to Naxos every September and he arrived a week early to look after us more aged geologists.

Doug explains the subtleties of a granite outcrop - the internal structures formed in a squidgy, semi-molten mass, solidifying in a region under directional pressure - ductile structures. Note Doug's expressive hand movements - essential to explain what is going on!

I won’t attempt to give a day by day account of our excursion as, unfortunately, my notes are extremely rudimentary. (They always are!). Instead I will try to give an outline of Naxos’s geological history.

Africa is heading north and is plunging under Crete and the islands of the Aegean. Most of the Aegean islands are made of sea floor sediments which have been taken down to great depths and then brought back up again. Naxos is different. It is a bit of continental crust which has been taken down to great depths and brought back up again. So they have been very effectively cooked and are therefore metamorphic rocks. The great depths are probably 30 km or more and all this happened, as far as geologists are concerned, very recently – the oldest rocks seen on the island are 30 million years old and most are younger. The rocks may have been formed before this but the “cooking” has transformed them into new rocks. We in the UK are used to seeing metamorphics which are more than 600 million years old, so seeing ones which are as young as this is, in itself, very interesting.

The rocks have not only been heated, but also folded in a very extreme way. One of the characteristic rocks of Naxos is marble. Many of the Classical Greek statues are carved from Naxos marble and the stuff used for those is extremely pure – 100% calcium carbonate recrystallised into large (1cm) crystals. The marble seen above is rather impure so you can see the folding. The pure stuff is similarly folded but the internal structure is impossible to see.

The temperature/pressure regime to which the rocks have been taken is not an unusual one. It has been described in many places, not least in the North East of Scotland, just north of the Highland Boundary Fault. There it was described by George Barrow and hence it is known as Barrovian Metamorphism. The characteristic rock in Scotland is pelite – a posh term for a rather non-descript  rock containing quartz, feldspar and clay minerals, probably formed in seas not far from eroding mountains. When this is subjected to Barrovian metamorphism the mineral composition of the rock progressively changes as the temperatures and pressures increase. The sequence of characteristic minerals with increasing grade is chlorite, biotite, garnet, staurolite, kyanite and sillimanite. In Naxos we do not find staurolite but the rest of the sequence can be found. Accompanying this change in mineral composition there is change in the rock type. We move from schist to gneiss to, eventually, migmatite where the rock starts to melt to form granite. And we have large granite masses on the island.

There are pelites on Naxos – quite a lot of them – formed from eroded mountains, but there are also huge amounts of marble which presumably formed in shallow seas with little sediment input. And there is an amphibolite – metamorphosed igneous rock – and some exotics which we will come to later. Even without the exotics we have an unlikely environment providing our raw material for metamorphism to cook.

Mt. Zas, 1001m, Naxos. A huge mass of marble with bands of pelitic schist - the vegetated bits on the mid-upper left.

Migmatite, Naxos. Shows the white neosome (new rock) in the upper part and the darker paleosome in the lower. The neosome has been melted out of the paleosome and squeezed to intrude its surroundings. Note the dark fragment (upper centre) bent to the left by the movement of the neosome. The neosome is virtually a granite.

Kyanite being pseudomorphed by sillimanite, Naxos. As the deeply buried rock rises to the surface due to erosion and tectonic forces, the kyanite becomes unstable and changes into sillimanite, which has the same composition but different structure. 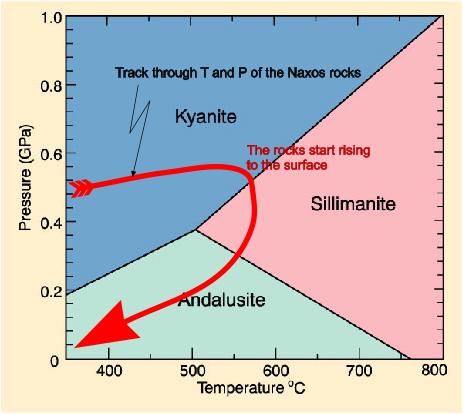 The route through Temperature and Pressure of the Naxos rocks

Kyanite, sillimanite and andalusite have the same composition – aluminium silicate – but are stable at different temperatures and pressures. When a rock containing one of these minerals has its environment changed the aluminium silicate will change to the stable form. In Naxos, as the pressure drops the stability field changes from kyanite to that of sillimanite. Why has only a proportion of the kyanite been changed ? Because the change requires an energy input and this is only available in small quantities as the pressure and temperature drop. For the same reasons andalusite does not form.

And now for the exotics. The following pictures show, in one, a pod of pure sillimanite, and the other an emery mine. Sillimanite is aluminium silicate and as a starting material, before metamorphism, it must have been kaolin, and this would require a long period of surface weathering. And emery is aluminium oxide, requiring a starting material of bauxite – again a long period of surface weathering is required. How this fits in with Naxos’s pelites – submarine, nearby coastline – its marbles – shallow seas, no sedimentary input – its igneous rocks – crustal instability – is, for me, a mystery.

There is much more to the geology of Naxos but this post is quite long enough. If you need to know more you will need to go on Doug Robinson’s 4th year excursion, or perhaps, ask Doug.